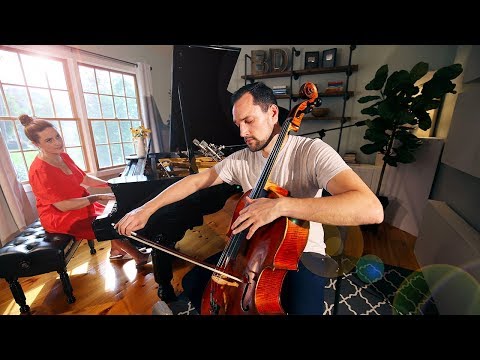 Numb by Linkin Park cover, arranged and performed live on cello and piano by Brooklyn Duo. Listen on SPOTIFY: http://spoti.fi/29trf2v --- SHEET MUSIC: http://bit.ly/BrooklynDuo ----- EXPAND for more info #RIPCHESTER Foundation: http://chester.linkinpark.com/ We both grew up listening to Linkin Park and it was one of Patrick's favourite bands. We were so saddened to hear of Chester Bennington's passing and really wanted to pay tribute to him with a cover. We both love this song, and it has been on our list of songs to cover for a long time. iTUNES: http://apple.co/1NhATCd Follow us: SPOTIFY: http://spoti.fi/1oPJROu INSTAGRAM: http://instagram.com/brooklynduo TWITTER: https://twitter.com/brooklynduo FACEBOOK: http://www.facebook.com/BrooklynDuo iTUNES: http://apple.co/1NhATCd PANDORA: http://www.pandora.com/brooklyn-duo SHEET MUSIC: http://bit.ly/BrooklynDuo SUBSCRIBE to our other channel, BROOKLYN CLASSICAL: http://bit.ly/1MVKVEl Brooklyn Duo: Marnie Laird, piano Patrick Laird, cello Patrick performs exclusively on Pirastro strings (http://www.pirastro.com) http://www.brooklynduo.com Brooklyn Duo Bio: Founded in 2014, Brooklyn Duo has quickly established itself as one of today’s most successful classical crossover ensembles. Through its creative arrangements and live video performances, the piano and cello duo has garnered a huge following, with over 450,000 YouTube subscribers, and over 150 million streams annually on platforms such as Spotify and Pandora Radio. Members Marnie and Patrick Laird met while attending the Kneisel Hall Chamber Music Festival in Maine in 2006 and were married in 2012. Both worked as professional musicians after graduating from the Eastman and Juilliard schools of music, respectively; Patrick as a founding member of popular cello rock band, Break of Reality, and Marnie as principal pianist of the New World Symphony in Miami. In 2014, on a whim, the couple arranged and recorded two pop covers (Shakira's “Empire” and John Legend's “All of Me”) and released them on YouTube. Shakira noticed the duo’s cover of Empire and promoted it to her 130 million-plus fan base, saying: “We're loving Brooklyn Duo's piano/cello cover of Empire! Great work guys." The boost that resulted from that exposure and the positive response they were getting on YouTube encouraged the couple to continue creating videos. Since then, Marnie and Patrick have released over 65 videos on their Brooklyn Duo YouTube channel and 7 albums of covers, spanning artists from The Beatles to Metallica to Taylor Swift (who also tweeted about them, saying their cover of her song “Blank Space” sounded "like a song people should walk down the aisle to"). In 2016, the couple started a second YouTube channel, Brooklyn Classical, with the goal of introducing classical music to a larger audience. With this new channel, Marnie and Patrick aim to showcase high quality, live performances of classical music. Brooklyn Classical often hosts high-profile guest artists, including the world-renowned Dover and Escher string quartets and percussionist Ivan Trevino. In 2017, Marnie and Patrick partnered with Carnegie Hall and Ensemble Connect, a collective of some of the best young musicians in the U.S., to produce a cover of a-ha’s “Take On Me”. The video went viral and garnered millions of views in just a few months. Popular classical music stations Classic FM and WQXR regularly share Brooklyn Duo’s music on their social media pages, with Classic FM calling the duo “masters of the artfully planned pop cover.” One of their covers was also recently featured in an episode of ABC’s Grey’s Anatomy. #BrooklynDuo